The most common closets you'll find in your home, office or other location are reach-in closets.  Reach-In closets are usually of narrow width, shallow (2' deep) and whose height is the same as in the rest of the room.  They aren't accessed by going into them (as in a small room) but by reaching in with your hand and arm to retrieve what you want. 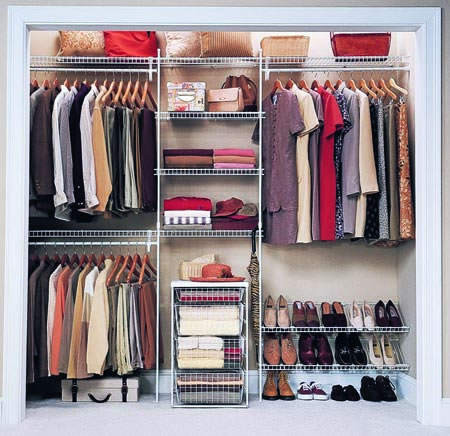 Reach-In closets commonly are found in entryways, bedrooms, bathrooms, pantries and hallways for linens.  They either have a conventional swing-out door, bi-fold or sliding doors.  Sometimes it works best to remove the doors  (especially in bedrooms and mudrooms) as they tend to get in the way.

The biggest mistake in outfitting a Reach-In closet is what builders have done in most homes--install a single pole and plank at medium height (usually about 68" above the floor).  While this works for some applications, it doesn't utilize space to the best advantage.  There are huge gaps below hanging garments (as most garments tend to be short as in a shirt or blouse) and above the shelf.  Very typically over half of the space in these type of closets is simply wasted.  A simple improvement (especially in an entryway) is to put an additional shelf above the hanging shelf. 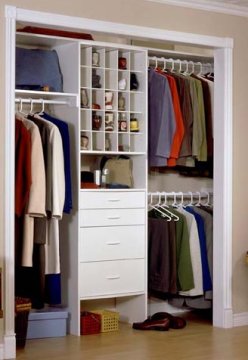 Major improvements over the "pole & plank" include: